We are right before a "Mario Kart Maker" with the attraction that this creation of circuits is carried out in reality. And it has fascinated us at home. So much so that this time we do believe that it will not be forgotten like

A remote control car in the Mario Kart universe

With what augmented reality has advanced, it's strange that there aren't more well-executed games that take advantage of it. I think Mario Kart Live Home Circuit is the first that has plenty of potential to become a benchmark in the consumer market.

Of the Nintendo games with physical elements, this Mario Kart Live Home Circuit is by far the most complete and best executed.

The starting point could not be simpler: a radio-controlled car with an integrated camera that is driven in the same way as a classic one but with the attraction that thanks to augmented reality, we can drive within a virtual circuit.

And that virtual circuit is none other than one from the Mario Kart game. Well, not just one. Actually, they can be as many as we want because it is the user who, at home or wherever, can design it and that route will be integrated with rivals, obstacles and of course power ups from any race in the Mario Kart game.

The car (there are two models, one for Mario and one for Luigi that are sold separately) has nothing to envy in construction and finish to any basic radio control. It is made of plastic, with details such as the connection indicator light or the hidden USB charging port, and a very successful wheel turning system.

In addition to the car, the kit includes some key elements for the experience such as the control doors or gates (there are four) and two direction indicator fences.

Here if the game enters the preferred material of Nintendo for these kits, cardboard. Both the fences and the porches are foldable, have good construction and will last a long time as soon as we are careful.

Once we have the car loaded (it is done via USB-C, another success), it is time to start testing it in a race setting.

Although we can operate it freely at home, like any other remote-controlled car (it is somewhat hypnotic to drive the car with the subjective view of your camera throughout the house), the interesting thing is that with the help of any physical element and the control gates, we configure a tour for any stay.

Here we can use a whole house plant or just a room. Does not matter. The only thing is that the range of the car is not its strong point and it is clearly the aspect that Nintendo has to improve.

If we want to stretch the circuit beyond a room, for example a whole house plant of about 90 square meters, we will not be able to do it unless we go behind the car. In our tests, just 5 meters away the car was already beginning to give connectivity problems and we lost the signal from the camera and control of the car.

The dream of lying on the couch participating in a great Mario Kart race all over the house was soon gone.

Once we have the circuit designed at home and the control gates in place (the race starts at gate 1 and ends at gate 4, regardless of the total length of the circuit), it is time to perform a test lap so that the route that Let's get it recorded.

Here the doors act as a control, but the circuit is created with the exact route we make between them . If we zigzag, we add turns and so on, these will be perfectly registered. Then, during the race, the real image of the places we pass will be superimposed on the road of our circuit, as well as other elements or rivals that we have been able to configure in the game.

Even if we have Luigi's physical car, before a race we can choose the character and type of car as in any Mario Kart

In the application we can choose the appearance of elements of ornaments of the circuit, where elements that modify the game or the Power Ups boxes appear, in addition to the car with which to participate. No matter what physique we have, Mario or Luigi, we can choose anyone.

Speaking of the game, it's free . It is enough to download it and then link the car with the help of a QR code that we read from the subjective camera of the car. Thereafter, the link is made automatically when you start the game and start the car.

The main game modes support quite a bit of playability. We can compete against ourselves or other cars (multiplayer but all cars face-to-face) trying to break records, with classifications and trophies as in any virtual Mario Kart .

As the age of the player increases, the limited speed of the physical car appears as a playability barrier for the future

As in the game, the speed of the remote control car is limited according to the displacement we choose. At all times they are safe speeds that some player may fall short over time. There are, yes, acceleration strokes through Power Ups and also with skids , as in the virtual game. 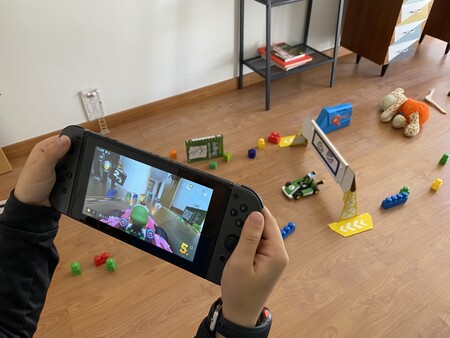 This aspect is very well achieved, although the car only skids and we can see it done on the screen. The physical car does not have that capacity but as I say, it was a key gameplay element in this Mario Kart and they have solved it outstandingly.

Returning to the gameplay, the quality of the camera and its field of vision also have room for improvement, something that would boost the level of the game quite a bit by having a better view from the screen.